The relay emergency valve controls the air brake system of a trailer and provides the "emergency brake function". It's not needed in case the installation contains already a park and shunt valve like TEM, TrCM or TrCM+ with this function. The valve complies with the requirements of EC regulations regarding brake systems. Versions with a predominance device can adapt the braking effect between towing and towed vehicle.

When released, the inlet is closed and the outlet opened. Air is allowed to escape from ports 2 via the opened outlet. Air is allowed to escape from the control port 4 via the actuation valve (trailer control valve).If the vehicle brake system is actuated, pressure is applied to port 4 of the emergency relay valve via the brake line. The control piston moves downwards together with the valve spindle. The outlet is closed and the inlet opened. The compressed air flows from port 2-1 to the ports 2 and from here into the brake chamber of the trailer.
The pressure in ports 2 is also applied to the control piston from below. The inlet closes and the outlet remains closed when the pressure forces acting on the control piston have equalized. This provides a partial braking position. Any change in pressure at port 4 results in a corresponding change in pressure at the ports 2.
In the full braking position, the piston spindle moves downwards to such an extent that the outlet remains closed and the inlet fully opened. Air is allowed to escape from port 1 out to atmosphere by uncoupling the coupling head ”Emergency” or by disconnecting the supply line.
Since air is also allowed to escape from the chamber between the control piston and the valve spindle piston, the spring forces the valve spindle downwards, the outlet is closed and the inlet opened. The full pressure from port 2-1 is directed to the ports 2. 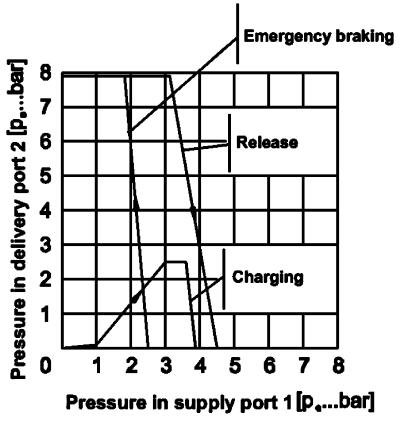 Emergency relay valves with a predominance device can be set in such a way that the pressure at the ports 2 is increased with respect to port 4 in the partial braking range from pe = 0 ... 0,5 bars.
Depending on the set spring force on the predominance device, the compressed air in the ports 2 is directed via a hole under the entire surface beneath the control piston after an increased pressure in ports 2 has been reached and after the valve plate of the predominance device has been raised. Only now can the final position, i.e. closed inlet and outlet be obtained.
If the trailer vehicle is to be manoeuvred in an uncoupled condition, then the automatic release valve (if fitted) flange mounted on the REV must be actuated.
The port is opened between port 2-1 and the valve spindle piston by depressing the pushbutton in the release valve. Compressed air flows from the air tank under the valve spindle piston and presses it upwards against the force of the spring. As a result, the inlet is closed, the outlet opened and air is allowed to escapefrom the wheel brake cylinders via the vent. A so-called ”safety pressure” has been reached if the pressure in the air tank is no longer adequate to force the valve spindle piston upwards against the force of the spring.
The brake can now no longer be released with the release valve. The trailer vehicle must once again receive a supply of compressed air by connecting the red supply line, only now can the trailer brake be released once again using the release valve.
The release valve automatically returns to the operating position when the red supply line is connected. The brake can now be applied in the trailer vehicle. 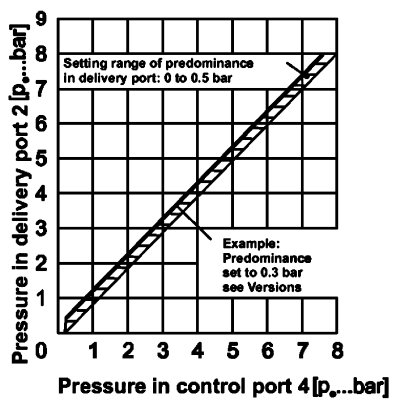 The relay emergency valve should be installed with the vent facing downwards and with its mounting flange secured by two bolts on the vehicle frame.
The automatic release valve, Part No. 352 012 001 is flange mounted on the relay emergency valve by means of two socket head cap screws M 8 x 20, Part No. 051 010 909. An O-ring, Part No. 024 033 109 and a sealing ring, Par No. 025 002 109 must be used for sealing the flange port. (Refer to types for part numbers of combinations).
Care must be taken in the case of combined versions to ensure that the actuation devices are easily accessible.

The relay emergency valve, together with its combinations must be maintained as part of legal regulations.

Ensure the function of the relay emergency valve meets the corresponding functional diagrams.
The functionality of the automatic release valve must also be checked, in addition to the above check for leaks

Note the specifications of the vehicle or brake manufacturer when adjusting the predominance.